skip to main | skip to sidebar

by
Uma Nagaswamy
Under the auspices of Composers day, a celebration was held in Meenakshi Temple at Pearland,Texas, USA on Dec 5, 2010. A fascinating lecture demonstration of Muthuswami Dikshitar's compositions was delivered by Kanniks Kannikeswaran, a veteran Musicologist from Cincinnati, Ohio, USA. 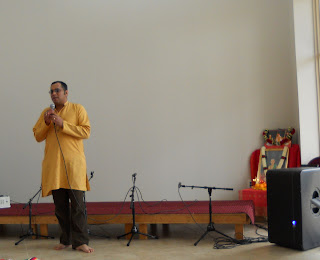 Opening his tribute to Muthuswami Dikshitar, Kanniks sang the sloka 'sada siva samarambham' saluting the lineage of prominent music gurus. Dikshitar was an ardent follower of Adi Shankaracharya's Advaita philosophy and this influence is seen extensively in his compositions. Kanniks chose to present the side of Dikshitar's compositions that exhibit similarity with the dhrupad compositional form. While Thyagaraja conveyed sublime expression of Bhakthi in his Rama Bhakthi Krithis, Muthuswami Dikshithar followed the stotra paradigm. Following the traditions of Alwars and Nayanmars, Dikshitar traveled throughout South India composing songs on the presiding deities of the temples he visited. 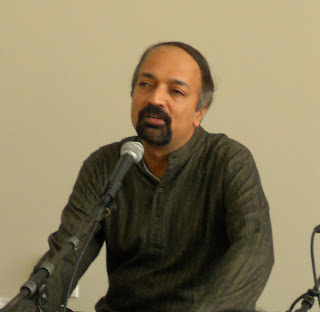 Taking the audience through a delightful journey to Banaras, Kanniks recalled his pleasant memories during a recent visit to this Holy city. Kanniks pointed out the numerous centers of worship in the Ghats of Kasi and great poets such as Tulsidas who lived there composing eternal poems on the banks of the river Ganges. The influence of these great composers was so great that religious texts were transported to the country of Trinidad in the form of Ram Charit Manas by indentured laborers. In these Ghats is where Muthuswami Dikshitar is said to have spent 5 years in the company of his guru Chidambaranatha Yogi. Speaking about Muthuswami Dikshitar's rare compositions, Kanniks mentioned Muthuswami Dikshitar's compositions on Kala Bharivar -Kala Bhairavam Bhajeham in bhairavam. Kanniks concluded his memorable lecture demonstration by rendering visvanathena Rakshithoham in a rare raga Samantha and gange mam pahi in janjuti (both these compositions are not in the sangita sampradaya pradarsini). In this segment he was accompanied by Priya Balakrishnan and Vyjayanthi Vivek. Kanniks lecture demonstration was received with great enthusiasm by the many avid music lovers of Houston, Texas.
Posted by Uma Nagaswamy at 3:31 PM